A Series of Young Adult Novels 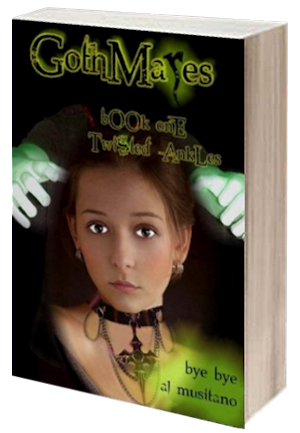 Gothmares is a series of young adult novels about a girl whose normal gothic daydreams become reality when she is faced with a real ghost and a real mystery to solve.

As soon as Angela Crowley set foot in Bradenton, Florida, she knew her life had just taken a turn for the worse! When something turns up in her new home, her parents won't believe. Angela soon discovers that fate has something quite extraordinary in store for her and her new love, Tim.

BUY IT ON CREATESPACE

Excerpt from Chapter One

The ivy-covered castle lay silhouetted against the darkening backdrop as the sun sank further below the horizon and dusk turned to twilight. For the moment, the path could be seen fairly well and any person walking it could avoid the pitfalls. But soon that would change, visibility would diminish beyond safe limits and twisted ankles would litter the entire pathway.

Inhuman shadows jumped behind any convenient hiding place, wood screamed as strong gusts of wind forced the trees to bend to their limit, and bats flew overhead carrying screeches almost beyond audible range. Branches from those trees grew in tortured spires. They reached over the path, looking as though they might grab any passersby and carry them away to unknown horrors. Sounds, some at a great distance and some frighteningly closer, most seemed just outside the range of identifiable.

As the front door of the old castle swung open, the hinges groaned angrily under the heavy weight of old wood. A tall, lumbering, anorexic old man glared down at the intruders with disdain. His suit looked like it had been packed in the attic since before the castle had even been built. His voice came raspy and weak, almost distant. The sound irritated.

"Come in, let me show you around," the cheery female voice said as Angela snapped quickly back to the reality. Angela referred to it as 'the' reality because, to her, it seemed like another dimension-a little distant, a little off. A dimension not entirely her own. One she tried to visit as infrequently as possible.

Angela had managed to survive to the ripe old age of 17-and quite by chance, according to her mother. Angela's parents looked at one new home after another, hoping to buy. Not entirely willing, they dragged her along to each and every one they looked at. She went reluctantly. Like I have a choice? They said they wanted her input. Right. They didn't usually like her opinion on anything important and rarely listened when she bothered to offer it.